Finding a Way In 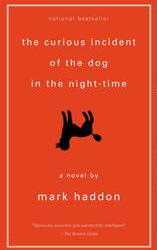 By now, you've heard the statistics--as many as 1 in 166 children will be diagnosed with autism, a complicated spectrum of conditions for which no one has yet found a certain cause or cure. Difficulty with communication is one of the markers, and so it's interesting to see books written from the first-person viewpoint of characters with autism and/or Asperger's. Here are three that give a peek into the concerns and problems of young people on the autism spectrum.

This was one of the first widely-read fiction books starring an autistic character, and it perhaps paved the way for more such characters. Christopher is having a very hard time fitting in with his family, and displays some behaviors that most people now associate strongly with autism, such as groaning, having a restricted relationship with food, and an aversion to touch. He's also bemused by math, aware of his self-imposed seclusions, and determined to solve the mystery of his neighbor's dead poodle. While Christopher claims to not have any gift for humor, the book is at turns amusing and heart-wrenching.

And again, a mystery. If you sense a theme, the only real similarities here are that these are all boys on the autism spectrum who are determined to find answers despite their natural challenges in doing so.

Ted is a young man who is aware that he sees the world very differently from his peers and family; he must practice ways to respond to interaction. The world for him is black and white: metaphors make no sense, and if someone doesn't smile at you, it means they don't want to be friends. Ted's aunt and cousin come to visit and the family takes a trip to the London Eye. Cousin Salim gets on--but never gets off. As the family falls apart with worry, Ted spins theories to solve the mystery, but only in working with his sister (in ways that are uncomfortable for someone with autism) can he truly make breakthroughs, and in doing so, he touches the edges of emotions new and strange. Ted does discover what happened, but this isn't the only mystery--Salim is pretty wiley, and there is more than one twist.

Marcelo in the Real World by Fransisco X. Stork (Scholastic)
Marcelo is ready to spend the summer between his junior and senior year at Paterson, a special school that meets his needs and where he'll be working with the ponies used for hippotherapy. He's good at this--good at Paterson. But his dad, a lawyer, wants him to go to a regular high school for his senior year, so he makes him a deal: work at the firm for a summer. If Marcelo is successful at the firm--if he follows the rules of the real world--he can choose where to finish school.

Marcelo opts for the firm, where he meets Jasmine, the head of the mail room who both protects him and allows him to fail so he can learn; lawyers good and evil; and secretaries who would like to use him for one thing or another. Soon, he's grappling with the concepts of friendship and personal agency, whether a "friend" is really a friend (and learning to trust one's instincts), the intricacies of adult relationships, and his trust in his father, especially as it concerns a victim related to a case that the firm cannot lose.

Marcelo's story is very much a complicated one, threaded through with his religious interests, his difficulty understanding interpersonal relationships, and his discovery of his own power as a person. The evocative and thoughtful writing would not be out of place in an adult novel, though at heart, it's a young adult book because it asks what I think is the essential YA question: when will I use my power, and why?

Posted by Hallie Tibbetts at 4:39 PM No comments: