I'm excited to say that I'll be returning as a first-round panelist for the 2013 Cybils in the young adult speculative fiction category. The Cybils are book awards selected by bloggers in areas ranging from book apps to nonfiction to picture books to young adult books (split into contemporary and speculative fiction because there are close to 500 books nominated between the two, nowadays, and only about two months to select a short list for each). You can nominate books to be considered from October 1-15,. A shortlist is announced January 1 and the winners are announced in February.

Mid-September until mid-October are my busiest time of year because of Sirens, but once that's over, you can expect posts about what I'm reading. Some years, I stay up until the nomination form opens because I'm always hoping I'll pick a winner (and I've had years when most of my picks hit the short list). This year, I'll have to focus on battling my reading nemesis, the fantastic Tanita Davis, who I think sneaked past me in the last few days of 2012 and read the most books in our division for the year.* I'm also thinking about changing up how I review during the Cybils; I think that quick "what makes it tick" posts for more books would be fun.

*The rules state that judges don't have to read the entire book. I've found that I start by reading 10 or 20, and then reading parts of the ones that I track down later on to see if they're competitive with what I've already read. Sadly, there's only room for a short list of finalists, and there are more great books than can make the cut.
Posted by Hallie Tibbetts at 8:00 AM No comments:

Email ThisBlogThis!Share to TwitterShare to FacebookShare to Pinterest
Labels: cybils

Palace of Spies by Sarah Zettel

I am not usually one to post about a book I haven't read, nor one to agree to any sort of promotion before I've come to an independent decision that I absolutely must tell everyone about a particular book. This, however, came through my inbox via Netgalley and it was too cute not to share. Palace of Spies by Sarah Zettel (Houghton Mifflin Harcourt Children's Group) is out in November. It looks like it might fill a little bit of the whole left by, sniff, the closure of the Gallagher Girls books by Ally Carter.

Posted by Hallie Tibbetts at 9:00 AM No comments:

If You Could Be Mine by Sara Farizan 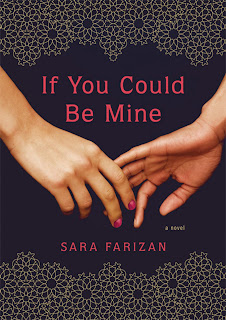 I'm going to call If You Could Be Mine by Sara Farizan (Algonquin Young Readers) brave--but not for the reasons you might think. I picked up this book at a BEA buzz panel, and stuck it in my purse for the trip home. Now, I had a comfy seat, tired feet, and I thought that perhaps I'd read a chapter or two before napping; instead, I was glued to the page for the entire flight.

Sahar loves Nasrin with all of the intensity of first, fiery love. She would do anything for Nasrin. Anything. In Iran, it's a crime for two girls (or two boys) to be together, but the government will gladly pay for a sex change, after which the relationship will no longer be illegal.

Think about that for a second. It's hard for me to wrap my head around.

Nasrin is engaged to be married, and married soon, so Sahar pursues the operation--without really knowing what she's getting into. As she learns more about what she asks of and for herself, and about the operation (and what it would mean for her, and for a group of people she meets who have had it), everything starts to fall apart.

A spoiler or three...

Given how often--fairly--books about GLBTQ people end in tragedy are questioned for those tragedies, I think it important to note that If You Could Be Mine is not all sunshine and sparkles, so that if you've had one too many, you can consider whether or not to read. Personally, I think that the author treated her subject matter with the utmost respect, and that she paints a clear picture of the challenges faced by her characters.

And to continue spoilering, what I thought was brave about the book is tied up in that. Nasrin, for example, is so very beautifully imperfect, and Sahar's love and slow growing realization of the imbalances in their relationship is so very real. (I really like seeing books that explore why people are not ALWAYS Meant to Be; first loves usually aren't.) Sahar blunders through problems with all the grace of, well, a teenager. There's a sense of inevitability coupled with hope that, in another time and place, everything could be so different...

At any rate, I found If You Could Be Mine to be a gripping, thought-provoking, and important read. It's out now.
Posted by Hallie Tibbetts at 7:30 AM No comments:

Email ThisBlogThis!Share to TwitterShare to FacebookShare to Pinterest
Labels: Algonquin, If You Could Be Mine, Sara Farizan, YA
Newer Posts Older Posts Home
Subscribe to: Posts (Atom)